We’ve got a big weekend folks and I’m dropping bombs!  Say what?  Hey, there’s not one, but two new breweries opening in Colorado this week!  This looks like it’ll be the biggest weekend we’ve had since the GABF circus rolled through town almost two months ago.  Strap on your beer goggles and get ready to go.  Oh and if you really want to enjoy this week’s post, grab your favorite beer and take a swig every time you see the word “BOOM!”.  Hurry up, you just missed one.

Ready?  Alright, let’s do this.

Firestone Walker XVI dropped not once, but twice.  BOOM!

The Bad News: It disappeared from store shelves almost as soon as it landed.  The Good News: It’s on tap at Parry’s Pizza right now (11/29/2012 11AM).  Head over and try this unique anniversary blend of 8 different barrel-aged beers!  BOOM!

This inky impy stout is proving to be a challenge to track down as well.  There’s not as much to go around as originally anticipated.  I’m not sure if we’ll be getting a second shipment or if the beer geek boom is stretching the supply thinner than previous years.  Whatever the case may be, if you want some, don’t wait around.  It’s hitting shelves this week and a few stores have already sold out.

Dry Dock bottled their 2012 batch of Bligh’s Barleywine on Tuesday.  BOOM!  This luscious Barleywine has spent the better part of 2012 aging in Stranahan Whiskey Barrels.

I had the opportunity to try a sample a few weeks ago during our interview with Dry Dock Co-Owner & Founder Kevin DeLange and it’s shaped up very nicely.  You’re going to love it.  And if you don’t, you’ll sell your bottles to me and like it.  Dry Dock’s releasing 10 cases at the brewery on Sunday, 12/9 ($20 each / 1-bottle limit), with more cases going to local liquor stores on 12/11.

Cantillon bottles have been dropping on local retailers too (thankfully no one was injured)!  BOOM!

My most favoritest of the Belgians.  I heart you Cantillon.  Sadly, I’m not too hopeful that I’ll find any. With everyone on the hunt, I figure winning this week’s $400+ Million Powerball jackpot might be easier than finding a little Cantillon on a store shelf around town.  But, hey, at least it’s returned to CO.  More Cantillon news below…

For this week’s Deviation down at Rockyard Brewing, the Jellyman will be pouring JPA – Jelly Pale Ale. 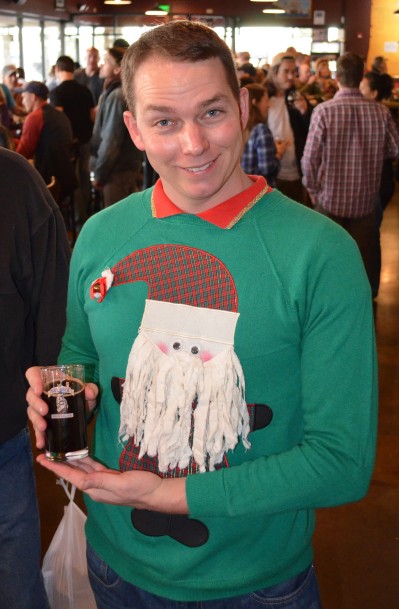 This week’s firkin will feature a Roasted Marshmallow version of Bethla-Yam.  Bethla-Yam is a Sweet Potato Stout, winner of the 2012 Ho Ho Ho Slapdown and creation from Dry Dock Brewer Brett Williams.  The win has secured Brett bragging rights around the brewery for the next 12 months as he beat out fellow brewers Doug Hyndman and John Schneider for the title.

Wynkoop’s Annual Parade of Darks is lined up for Saturday.

34 breweries bringing 82 brews, all leaning towards the darker side of the force.  BOOM!  Here’s the complete list from Wynkoop’s very own Beer Evangelist, Mr. Marty Jones:

Just up the road from the Wynkoop, Crooked Stave will be hosting Cantillon’s Zwanze Day on Saturday.  BOOM!

This is a world-wide event with a coordinated toast at 1 PM MST.   This is the first time a Colorado location has been picked to participate so don’t miss out.  To quote some snotty teenager somewhere in America, “it’s kind of a big deal”.  BOOM!  For more specifics, check out our article about Zwanze Day from earlier in the week by clicking HERE.  Crooked Stave Artisan Beer Project is located at: 1441 W 46th Ave, Unit 19, Denver, CO 80211. 720-508-3292.

Black Bottle Brewing up in Fort Collins, CO will open their doors to beer freaks for the first time this Saturday.  BOOM!

This new brewery, run by Sean Nook, will be pouring their own beers, along with some great craft beer on their 40 guest taps.  They’ll also have a full bar and fermented grape juice for those non-beer drinking types you so unwisely choose to associate yourself with…  I’m freakin’ psyched about these guys.  They’ve gotten great reviews and took second place in the People’s Choice Awards at the 2012 Gnarly Barley Brew Festival.   In the near future, they’ll be working out a barrel-aging program, souring beers and brewin’ up some nice styles of craft beer that they’ll want to drink.  And by the looks of things, I’m pretty sure you’ll want to drink them too.

Their videos are tough to beat.  I mean, have you seen this yet?

Over in Boulder, Asher Brewing turns 3 this weekend.

But wait, there’s more.  While you’re up in the People’s Republic of Boulder, swing over to Twisted Pine and grab a bottle or 3 of the last installment in their Artisan Ale Series.  For December, they’re releasing Noel Tripel.

Into next week, New Belgium has planned “The Creator’s Dinner”, where all the beers being poured will be introduced by their creator / brewer.  This is happening over at The Kitchen in Denver on Monday at 6:30.  Check out this lineup:

BOOM!  There will be incredible food paired with each beer.  This is a really great opportunity to meet and talk with some of the creative minds behind New Belgium’s fantastic beers.  Reservations are $85 and can be made by calling 303-623-3127.  The Kitchen Denver is located at: 1530 16th St, Denver, CO 80202.

That’s it.  Did you make it all the way to the end?  I hope so.  I’m all BOOM’d! out.  Yes, that one counts too, so take your final sip and go grab a nap.  You’re going to need it before the weekend gets here.

Have fun out there.