It’s 2013 and we’ve only got 52 weekend’s to enjoy this year.  Don’t let one pass you by.  Plenty to do, plenty to see and most importantly, plenty to drink.  You ready?  Need a little motivation?  Click HERE for a reminder of what 2012 brought us.  NOW are you ready?  Thought so.

Crooked Stave’s ready for the weekend.  Stop by the tasting room for some funky goodness. 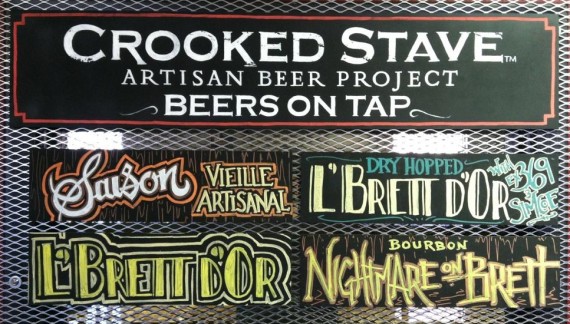 My friend Firky D. Firkin, made his way down to Rockyard to brew with Jellyman and help bring you this week’s Deviation. 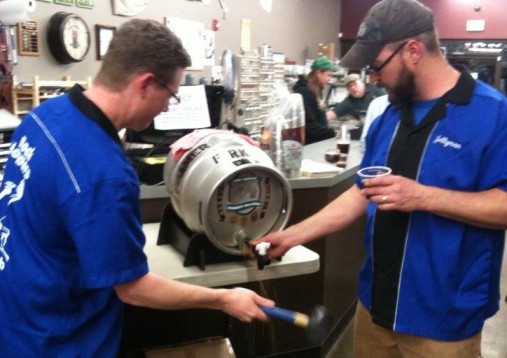 Over at Dry Dock in Aurora, they’ll be tapping a Centennial Dry-Hopped Pale Ale.  Tapping at 3 PM.

Last week, Dry Dock brewed for the first time at the new production facility.  Kevin, Doug and the rest of the gang made a monster batch of Apricot on their new 40 BBL brew system.  Look for cans coming very soon!  Click HERE to watch the live feed and see what they’re up to in the new digs.  Dry Dock Brewing is located at: 15120 E Hampden Ave, Aurora, CO 80014.  303-400-5606. 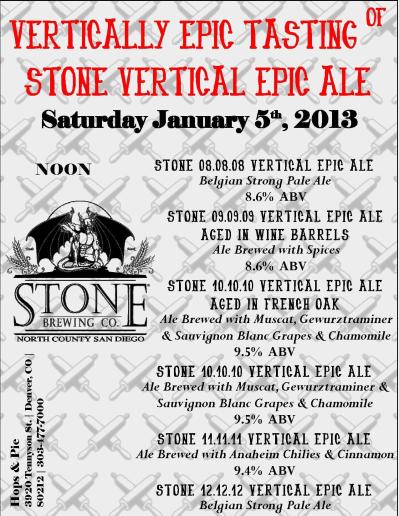 Also on Saturday, don’t forget to check in with Turk & Gubna on the Colorado Craft Beer Show.

They’ve got your weekly dose of Colorado craft beer news.  Tune into AM760 on Saturday at noon to listen live.

Odell Brewing will release Lugene Chocolate Milk Stout on Sunday.  What’s a new beer without a new beer release party?  Odell has you covered with live music, food trucks and plenty of Lugene on tap and in 4-packs. 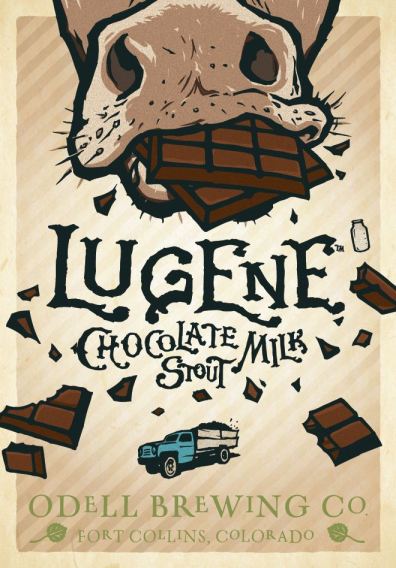 The beer starts pouring at 11 AM, with live music at 4 PM.  Lugene Chocolate Milk Stout is named after local Fort Collins dairy farmer Lugene Sas.  Click HERE to see a day in the life of Lugene and his family of lovely bovine sweeties.  Odell Brewing Co. is located at: 800 E Lincoln Ave, Fort Collins, CO 80524.

January’s not exactly a big month for beer festivals, but this is Colorado and there’s ALWAYS something on the horizon.  It’s not too late to book a trip to Vail for Big Beers, Belgians and Barleywines, which is coming up next weekend.

Ticket info, hotel deals and a full schedule of events can be found HERE.  We haven’t been since ’07 and are excited to be going back.

And later this month is the Winter Brew Fest in Denver at Mile High Station.

This is on Friday, January 25th and you can click HERE for all the details.

Lastly, I noticed last night that the Facebook Page is approaching 300 Likes.  Thank You all for your continued support!  As a Thank You, I’m giving away something special to lucky #300.  Not sure what yet, but we’ll hook you up with something any craft beer lover will enjoy.  So check us out on Facebook and “Like” us if you haven’t already.  Thanks again guys!  We really appreciate you.

A Brewer, A Blogger, and A Beer at Dry Dock Brewing. Part 1 – The First 7 Years.

A brewer, a blogger and a bottle of 6-year old Dry Dock Framboise.  Where could this be headed? Well, when the brewer is Kevin DeLange, founder and owner of Dry Dock Brewing in Aurora, CO, good things are bound to happen.  Join us as we talk brews, brewers and breweries and share some tasty brews along the way. (That’s a lot of brew talk and that’s how I like it!)  In Part 1, we’ll discuss Dry Dock’s Past and Present, going all the way back to their opening in 2005 and working up to the release of Bligh’s Barleywine later this year.  In Part 2, we’ll discuss the Future of Dry Dock Brewing into 2013 and beyond.  Grab a beer, err brew and join us!

Where, oh where does the time go?  It seems like the older I get, the quicker the time passes me by. I noticed it the other day as I was preparing for the upcoming Weekend Beer Buzz.  On my calendar, I had written down the Dry Dock Anniversary Party coming up on November 10th.  When I realized it was their 7th Anniversary, I scratched my head in disbelief.  7 years?!?!  Has it really been 7 years?

My wife and I discovered Dry Dock Brewing in Aurora within the first few months of their opening in 2005 and it didn’t take us long to become adopted as “regulars”.  I can still remember sitting in the original, tiny tasting room, behind The Brew Hut homebrew supply shop, sipping on their small batches of hand-crafted brews.  The Dry Dock of 2005 and 2006 was a family.  A pretty goofy one for sure, but a family nonetheless.  Everyone knew each other and we looked out for one another. Dry Dock came along and filled Aurora’s craft beer void and began producing great beers in the process.

While the small, 800 square foot tasting room, with its’ maximum capacity of 24 people (this may or may not have been exceeded on occasion…) might be extinct, Dry Dock and their beers have risen and gone on to rank among some of the finest in the land.  Walking into Dry Dock these days, one can’t help but notice the wall of awards in the Brewery located at the corner of Hampden and Chambers. 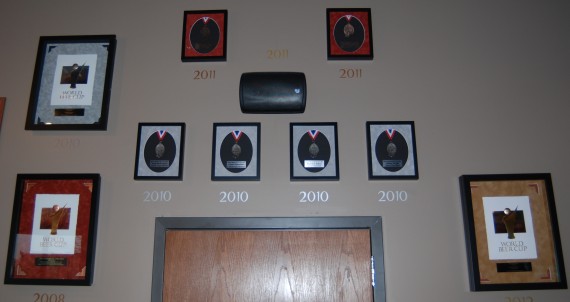 A ton of medals decorate the brewery, coming from a variety of sources, including the Colorado State Fair, Great American Beer Festival and the World Beer Cup. 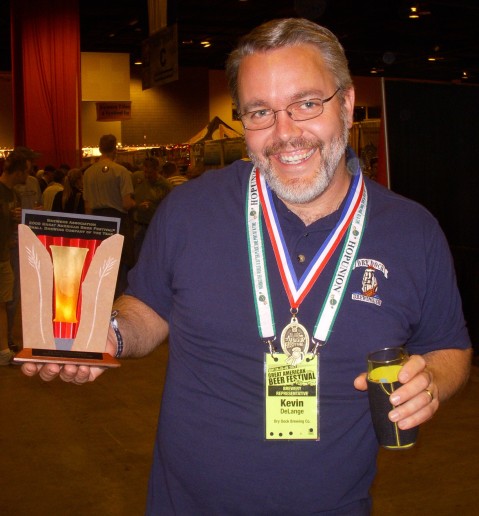 Let’s not forget they were crowned U.S. Small Brewery of the Year in 2009.  This all happened in less than 4 years!

By 2009, Dry Dock had outgrown their humble home behind The Brew Hut and were forced to expand further down in the Aurora strip mall they called home.   They upgraded to a 7 BBL brewhouse and jumped into their current 9,000 square foot location, which gave beer drinkers plenty of space to spread out and enjoy themselves.

Dry Dock brought The Brew Hut with them, which has evolved into the area’s leading retailer for supplies, ingredients and know-how with regards to homebrewing, wine making, cheese making and more.  The new location has also played host to many popular events like the annual Docktoberfest and the Ho Ho Ho Slapdown. 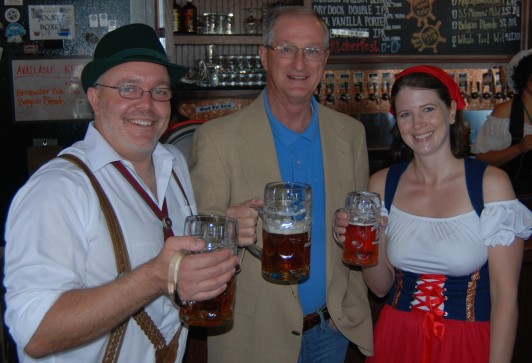 Over the years, owners Kevin and Michelle DeLange have recruited a team of world-class brewers that bring a variety of different beer backgrounds and resumes into the brewhouse.  The Dry Dock brewers keep things interesting for even the most adventurous of beer geeks with an ever rotating selection of seasonals, one-offs, firkins and barrel-aged rarities that supplement their award-winning Flagship lineup of beers.

The team is led by Head Brewer Doug Hyndman, who has previously brewed at Ska and Green Flash.  Hyndman took the reigns at Dry Dock when former Head Brewer Bill Eye departed to open Prost Brewing in Denver earlier this year.  Hyndman has already begun to make a name for himself, by bringing the West Coast to Colorado, with his big, citrusy, hop-centric Double IPA’s.  The delicious flavor of his Hop Abomination (a favorite of mine!), will be squeezed into cans for the first time early next year.  (More on Dry Dock’s entrance into the canning business in Part 2).

For Dry Dock’s weekly Firkin Friday releases, Brewer / Firkin Master Walt Chleva has been given carte blanche to come up with new and interesting batches of beers for the Friday afternoon tappings.  He tries to pair his releases with the seasons and looks to “use local ingredients as much as possible”.

Many of the beers don’t make it past the first hour of getting tapped on Friday evenings.  Not much of a surprise considering he’s created beers like Peanut Butter Cup Porter, Double Dry-Hopped Double IPA and his personal favorite, Toasted Coconut Porter.  In the Toasted Coconut Porter, Chleva says he “uses a pound of hand toasted coconut for each firkin”, which he’s happy to point out, “makes my house smell great!”.

Although not every beer is a sure-fire winner, (Wasabi Rice Pale anyone?) and he’s still fine tuning his Maple Bacon Amber Ale recipe, but the majority of his Firkins leave Dry Dock customers thirsting for more.  In the past month alone, he’s released a Boysenberry Sour, Madagascar Vanilla Bean Porter and a Cherry Belgian Blonde.  He’s already looking towards next Summer, when he’s hoping to “make a Palisade Peach Ale and maybe a Fresh Hop Firkin”.

Do yourself a favor and get over to Dry Dock on a Friday to see what he’s brewed for the week.  Keep up to date with what Chleva has planned by checking our Weekend Beer Buzz.  Firkin Friday Tappings occur at 3 PM and 7 PM.  Don’t be late or you might get stuck listening to your friends tell you about the one that got away.

Take for example, last year’s inaugural release of Bligh’s Barleywine, an English Barleywine, aged in Stranahan Whiskey Barrels.  Bligh’s was so well received by craft beer aficionados that it catapulted the beer onto the “Top 100 Beers on Planet Earth” as ranked by BeerAdvocate.com.

Later this year, Dry Dock will release a new batch of Bligh’s Barleywine in 22oz. bombers.  This highly anticipated, 10% ABV English Barleywine has spent the past year in Colorado Whiskey Barrels, absorbing notes of vanilla, oak and caramel along the way.  DeLange was kind enough to pull a nail from one of the many barrels housing Bligh’s and share a sample of this year’s batch.  You’re not going to want to miss this one! 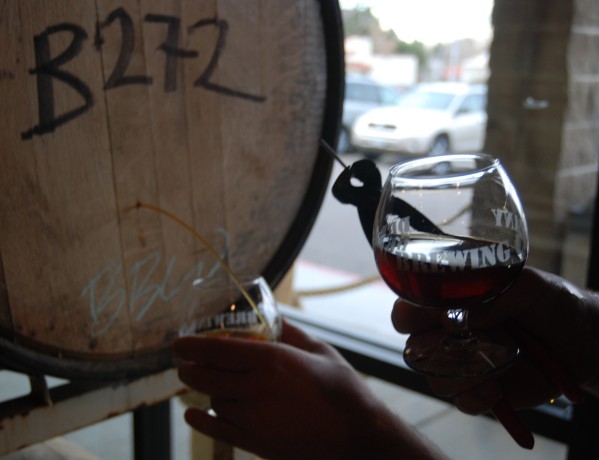 With a target release date of 12/15/12, it’s the perfect beer to warm up with at the end of a cold, winter day.  In addition to 22oz. bombers, Bligh’s will also be pouring in the Tap Room for a limited time. Sorry, but NO Growler fills, in order to allow as many people as possible to try this extremely popular beer.

From There to Here, But Now Where?

In 7 years, Dry Dock has gone from a nano-brewery in the back of a homebrew supply shop to one of the top breweries in the nation.  But what’s next for Kevin and Michelle DeLange and their team of skilled brewers and dedicated employees?  Check back soon for Part 2 as we continue our chat with Kevin DeLange and talk about what lies ahead for the Aurora-based brewery.  This is BIG!  Trust me, you won’t want to miss this!